I love reading the Gospels. I think part of the reason is that throughout my life, no matter how frustrated or upset I have been with religion, I always liked Jesus. I always thought he was on point with what he said and did. As much as I thought those WWJD (What would Jesus do?) bracelets were cheesy, I liked the idea of modeling my life after his teaching and example.

One thing about the life of Jesus never made sense to me. When Jesus healed someone, he often told the person he healed not to tell anyone about it. He told them to keep the healing a secret. I always thought this was a bit strange. If you were trying to start a movement, wouldn’t you want to get people to spread the word about it? Why tell people to keep it quiet? Besides, it never really worked anyways. The people Jesus healed were always so amazed and grateful, they couldn’t keep quiet about it.

The Call to Love in Secret

Awhile back, I read a book called “Love Does” by Bob Goff, and he had an interesting take on these passages. Bob wondered if God wants us to do really awesome things for other people, but keep it a secret. In other words, we should do extraordinary acts of love for others, but not broadcast it or brag about it.

Jesus talks about a similar idea in his teachings on giving, fasting, and prayer. He recommends doing these things in secret, rather than bragging and telling others about it. He suggests keeping it between us and God.

Maybe this is why Jesus told the people he healed not to tell anyone. Jesus was into doing awesome acts of love and healing for people, but he didn’t brag about it so everyone would think he was someone great. He was humble, and tried to keep the awesome ways he loved and served others between him and God.

Sometimes I wonder if it might be good for us to follow this example of Jesus. God wants us to do awesome acts of love and service for others, but he also cares about our heart. He doesn’t want us to become puffed up when we love and serve others. Instead, God values humility.

Discussion: When you love and serve others, is it important that you get the credit? Why or why not? As an experiment, try doing something awesome for another person, but keep it a secret. See what happens. 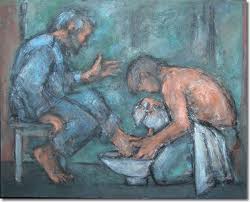