The Power of Moderation

As I grow older, I have become more and more of a fan of moderation. I think part of the reason is personal experience. I have suffered the consequences of non-moderation. For example, I push myself too hard at Crossfit, and end up getting injured. I work too much and too long on a writing project, and end up missing a night out with friends. I try really hard to follow the rules, and end up being judgmental toward myself and others. I could go on and on.

I also have seen the importance of moderation in the world around me. I’ll give you an example from psychology. The Yerkes-Dodson Law says is there is an upside-down U shaped relationship between anxiety and performance. At very low levels of anxiety, performance is bad. For example, let’s say you have to give a speech for a class in school. If you have a very low level of anxiety, you might not take it seriously and prepare as much as you should for the speech. As your level of anxiety goes up, performance tends to go up also.

But only to a point.

At some point, additional increases in anxiety actually lead to lower levels of performance. There’s a point where anxiety becomes maladaptive. For example, you might over-prepare for the speech, not sleep well the night before, and be so nervous that your hands shake and you forget what you were trying to say.

So, anxiety is good for performance up to a point, but after a certain point anxiety becomes maladaptive.

The ideal level of anxiety to achieve your best performance is, yep, you guess it, moderate.

Paul and the Galatians

In the Bible, the apostle Paul actually talks a lot about moderation. Paul was a Christian who traveled around starting churches. After he started a church, he would move on to another place and start another church. Not surprisingly, the new churches he set up had questions and problems, and they would write letters to Paul asking him what he thought about various issues. Paul would write letters back to the churches addressing their questions and concerns. These letters make up a large portion of the Christian New Testament.

One church in the city of Galatia was struggling with the issue of moderation. Namely, one major issue in the early church was the relationship between Jewish and Gentile (i.e. non-Jewish) Christians. Paul didn’t think the Gentile Christians should have to follow the old Jewish laws (e.g., circumcision, not eating certain foods), but some of the Jewish Christians thought they should. Sometimes these Jewish Christians would follow along after Paul set up a church, and tell the new Christians they actually had to follow a bunch of rules different from what Paul had told them.

In his letter to the church in Galatia, Paul was clear that the Galatian Christians didn’t have to follow the old Jewish laws. A huge theme in the book of Galatians is freedom in Christ. However, as important as freedom is, you could see how freedom might be problematic if taken to the extreme. To give a current example, I was listening to the news and heard a sad story about an actor who was into drugs and ultimately overdosed and died. Freedom is good, but in moderation. 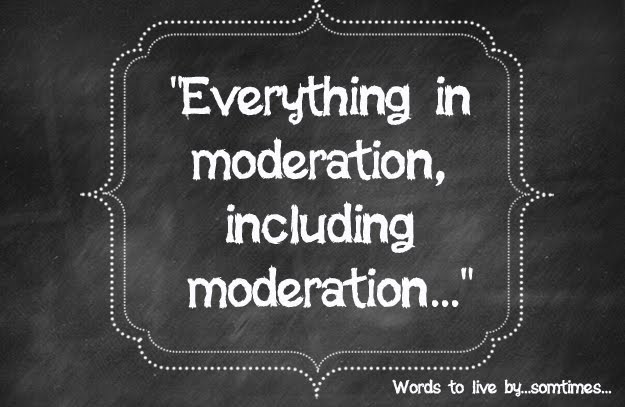