PLAN to Respond, Not React

In my life, I spend a lot of time reacting. For example, I might take on too much at work and get stressed out, so I react by going the opposite direction and not talking to anyone for a few days. Or I might start to feel lonely, so I react by calling a bunch of people until I find someone to hang out with. If something happens in my life that is unpleasant, I tend to react by trying to find something to distract me. And so on it goes.

A lot of my actions and behaviors are a reaction to something else. Sometimes I even bounce back and forth, reacting to my reaction. It’s not a pleasant way to live my life, and sometimes it feels like I’m not in control.

So, what’s the alternative? One thing I’m trying to work on is to respond rather than react. Here’s the difference:

How to Respond Rather Than React

So how do we learn to respond rather than react?

Here are 4 steps that have helped me. (Remember the acronym PLAN.)

When things happen in your life, do you tend to react or respond? Next time you experience an unpleasant emotion or an urge to do something, walk through the four PLAN steps: Pause, Learn, Ask, Next. 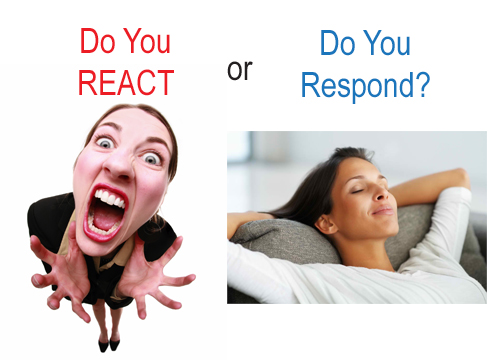