How to Address the NFL Protests with Humility

Starting with Colin Kapernick last season, NFL players have protested unjust treatment toward African Americans and other persons of color by kneeling during the national anthem. Irrespective of your position on these protests, this is an issue that brings up strong feelings on all sides.

This weekend, President Trump sharply criticized NFL players who protested during the national anthem, saying he wished owners would fire the protesting players. “Wouldn’t you love to see some of these NFL owners, when someone disrespects our flag, to say, ‘Get that son of a bitch off the field right now. Out. He’s fired! He’s fired!’”

Here’s what Trump struggles to understand: Trying to enforce change on to others in an authoritarian manner doesn’t work. It only increases anger, frustration, and resistance.

If Trump wanted to effectively address the NFL protests, he would lead with humility.

I recently did a research project where I brought undergraduate students into the lab who disagreed on one of several contentious issues (e.g., gay marriage, abortion). Participants engaged in a discussion about the topic, and then students completed several questionnaires, including rating the humility of the discussion partner and how close they felt to that person. Participants also reported whether their opinion on the controversial issue had changed as a result of the discussion.

A Better Way to Address the NFL Protests

If Trump wants to be effective about engaging athletes (and the nation) about the NFL protests, he could try some of the following:

By trying to strong-arm NFL protestors to see things his way, Trump’s actions backfired. However, if Trump could engage the protestors in humility, and begin to address the issues that led to the protests in the first place, Trump could take a huge step forward and bring this country together to heal the racial divisions that divide us.

Take-Home Point: If you want to effectively address an issue you care strongly about with someone who believes differently, engage with humility. 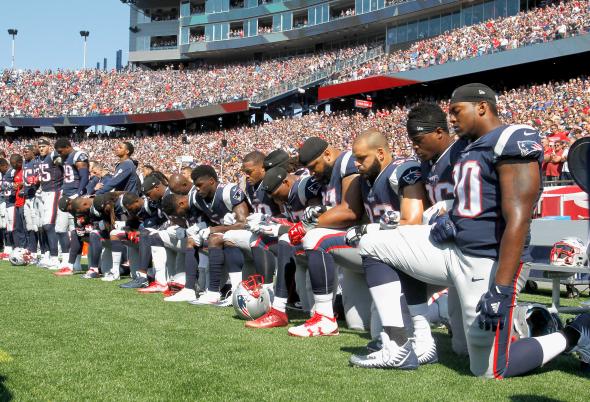