A World Without Facts

I was having a discussion about gun control with some friends the other day, and the dialogue ended up breaking down. As I was reflecting on the conversation, I realized part of our problem was we couldn’t agree on the facts.

Disagreement About the Facts

Another example had to do with whether keeping a gun in the home was related to a higher risk of gun death (either by homicide or suicide). There was a research article that supported my position, but a friend said that the source was biased. We couldn’t agree on the facts (i.e., is having a gun in the house related to higher or lower rates of gun death), and so the conversation couldn’t progress.

I think part of the problem is that in our society today, we pretty much always merge fact and story. What I mean is this: When you watch the “news,” you usually aren’t getting an unbiased reporting of the facts. Most people understand, for example, that Fox News tends to be more conservative, whereas MSNBC tends to be more liberal. Other news sources are even more biased. If you watched Sean Hannity one day, and the Daily Show the next day, you would think you were living on two different planets.

When I was growing up, this polarization of news sources wasn’t so extreme. Does anyone know the political views of Barbara Walters? No, you don’t, because there was a commitment to present the facts without letting your opinion or story work its way into the reporting. Now, it’s completely normal to merge fact and story. Biased reporting is a way of life.

Facts and Story in Marriage Counseling

When doing marriage counseling with couples, it is important to separate facts and story. The facts are what we would see if a video camera recorded what happened. Then the story is something we make up about the facts. It’s our interpretation of what happened. It may or may not be true.

For example, let’s say a husband came home late and didn’t call his wife to let her know. The facts would be what a video camera would catch. For example, the husband told his wife he would be home at 6pm. He walked in the door at 6:45pm. The wife did not receive a phone call.

Everything else (e.g., the husband is selfish, inconsiderate, is having an affair, etc.) is a story the wife is making up. This doesn’t mean the story isn’t true. It might be true. But it’s important to recognize that it also might not be true. When you separate facts from story, you can move forward and have a reasonable dialogue.

In the same way, in order to have healthy dialogue about difficult issues, we have to agree on the facts. A big part of coming to an agreement on the facts is to separate facts and opinion.

Back to the husband and wife: Let’s say we were trying to lay out the facts, and the wife said something like, “The facts are that my husband is selfish.” This is actually a story disguised as a fact. The husband will probably not agree that this is a fact, and the dialogue will break down.

In the same way, if I was discussing gun control, and said something like, “The facts are that we need to implement stronger gun laws in order to prevent incidents like the Las Vegas shooting from happening in the future,” it is likely that the conversation won’t go anywhere. This is an opinion disguised as a fact. In order to have a productive conversation with someone I disagree with, I need to separate the facts from my story about the facts.

Discussion: What do you think about the idea of separating the facts from our story about the facts? How can we agree on the facts so we can have a productive dialogue with someone with whom we disagree? 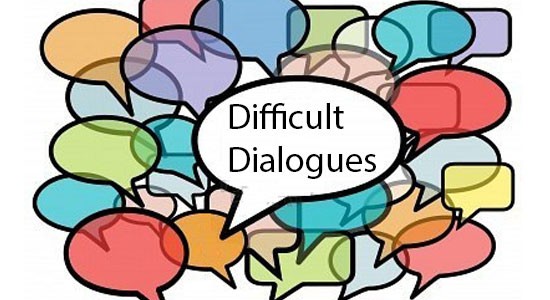