Was Jesus a Minimalist?

This post is Part 3 in a 3-part blog series on Minimalism. (If you missed Part 1, you can find it here.)

I’ve been getting into a new podcast called The Minimalists. Their basic message is that we have a problem—we have too much stuff. We think having more stuff will make us happy, but it doesn’t. The solution is to get rid of the stuff that doesn’t bring us value, so we have more time and space for the things that truly make our lives meaningful.

As I have been listening to the Minimalists, I have noticed some interesting parallels between the Minimalist message and the message of Jesus. Was Jesus a Minimalist?

One of my favorite stories of the Bible is found in Mark 10. The story is about Jesus and money. Here is the text:

As Jesus started on his way, a man ran up to him and fell on his knees before him. “Good teacher,” he asked, “what must I do to inherit eternal life?”

“Teacher,” he declared, “all these I have kept since I was a boy.”

Jesus looked at him and loved him. “One thing you lack,” he said. “Go, sell everything you have and give to the poor, and you will have treasure in heaven. Then come, follow me.”

At this the man’s face fell. He went away sad, because he had great wealth.

I think a lot of times when we read this story, we focus on what the rich young man had to give up. We might think, “Yikes, Jesus is extreme. Why did Jesus ask the guy to sell EVERYTHING? Does this mean I have to sell all my stuff and live in a tiny house?”

I think these questions miss the point. First, let’s consider the rich young man. On the surface, he seems to be doing really well. He obviously has done well for himself in his business. He has made a TON of money. In our culture, we might say he’s achieved the American Dream. He has the big house, the fancy cars, and the six-figure income.

He’s also doing pretty good at the whole religion thing. When Jesus reminds him to keep the commandments, the rich young man says that he has kept all the commandments since he was a boy. He had the religion thing down from the very beginning. He didn’t murder anyone, he went to church each week, and he tithed a tenth of his income. He checked all the boxes.

But something was still missing. The rich young man doesn’t know what it means to have eternal life. A lot of times we think of “eternal life” as just getting to heaven, but I think it means more than that. Jesus said that he came so that we may have life, and have it to the full (John 10:10). Eternal life means “life to the full” now AND later.

Jesus and the Rich Young Man

But he missed it. He was given a huge opportunity and he missed it, because he loved his stuff too much. And now he goes down in history as a sad story about a guy who valued his stuff more than living a full, meaningful life with Jesus.

Was Jesus a Minimalist?

Was Jesus a Minimalist? Absolutely. As you can see from the story of the rich young man, Jesus didn’t want us to miss out on eternal life because of our stuff. Don’t make the same mistake as the rich young man. Give away most of your stuff so that you have the time and space to live a full, meaningful life. 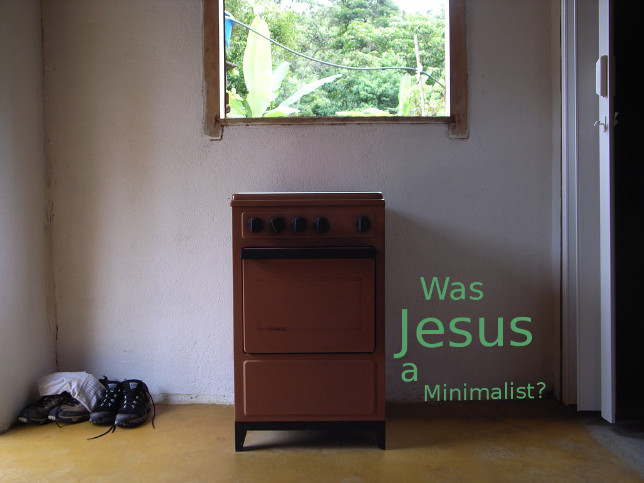