Why It’s Important to Say Yes to Life

One of my favorite books is called “Love Does” by Bob Goff. There was one particular story in the book that taught me an important lesson: Whenever possible, say yes to life.

How Bob Became a Diplomat to Uganda

Bob is a lawyer, and one day he received a phone call from someone with a heavy accent, claiming to be the ambassador of Uganda. “Are you Bob Goff?” the person asked.

Bob had recently played a practical joke on his friend Doug, so he thought Doug might be getting back at him. But he decided to play along, and just say yes.

Man on the phone: “Are you Bob Goff?”

Man on the phone: “I have a question for you. We have been impressed by your work. Would you consider being the consul for the republic of Uganda?”

A couple months later, Bob received another phone call, from the same person, still claiming to be the ambassador to Uganda. He asked Bob to meet him in New York on the next Saturday.

Bob said yes, still thinking it was a practical joke.

But as it turned out, it wasn’t a joke after all. And that’s how Bob became a diplomat representing the Republic of Uganda to the United States. By saying yes, even when it seemed crazy.

Why It’s Important to Say Yes

The point of the story is that sometimes God uses circumstances or random events in our lives to point us toward God. When this happens, we have the option to lean into the opportunity and say yes, or back away.

I had a “say yes” experience a few years ago. I was sitting in my office, writing a paper on my laptop, when I received a text message from a friend at church. He was leading a summer mission trip to Guatemala. They needed another person to help lead the trip, and he asked if I wanted to go.

There were all sorts of reasons not to go. The trip was coming up quickly, I had some things scheduled already I would have to cancel in order to go, the flight was expensive, it would take a week out of my summer, and traveling to Guatemala could be dangerous.

But the trip was also an opportunity. It was an opportunity to travel somewhere cool, go on an adventure, serve people less fortunate than myself, and develop relationships with a bunch of new people.

So I said yes.

My hope for you is the next time you have an opportunity to do something new, exciting or different; or you feel God leading you in a direction that might seem a bit crazy… You would just say yes. You never know what God might have for you.

Discussion: What is one area of your life right now that is an opportunity to lean into and say yes? 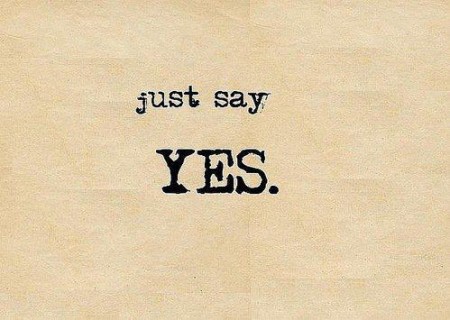