When You Want Something, Lead With a Small Request First

We make requests of people every day. Maybe you’re in sales, and you’re trying to drum up more business. Or maybe you need to ask something of a co-worker, but you’re worried they won’t want to do it.

The reality is that when we make an ask, people usually say no. It doesn’t mean that there’s something wrong with them—the reality is that most individuals are self-focused. They don’t want to give their time, money, or resources unless they have to. It’s human nature.

If you are trying to make a big ask, your chances of getting someone to buy-in are even lower. People rarely agree to large requests if they don’t have to. People are usually just too busy with their own stuff.

Foot in the Door Technique

There’s a research finding from the field of psychology called the “foot in the door technique” that can help you when you are trying to make a big request of someone. The basic idea is this: People are more likely to agree to a big request if they have already agreed to a smaller request that is related to the big request.

Here’s an example from my own childhood. When I was in boy scouts, I had to sell a lot of popcorn. Popcorn is the boy scout equivalent of girl scout cookies. Selling popcorn was difficult. Some people wanted popcorn, but a lot of people didn’t. I had to walk around several neighborhoods to make enough sales to get my coveted Game Boy.

If I had known about the foot in the door technique, however, I might have done something like this: I would have first asked if they were willing to do something small (e.g., sign a petition supporting the formation of a new boy scout troop in the area). Then, after they had agreed to the small request, I would have brought out the popcorn catalog and asked for the big request. If they agreed to the small request, chances are they would be more likely to agree to the big request.

Lead with a Small Request First 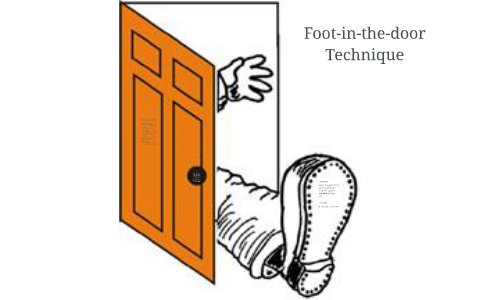