The Enneagram and Inter-Type Movement

One of the more interesting (and for me, confusing) parts of Enneagram theory involves inter-type movement. In other words, the lines on the Enneagram connecting the different points are meaningful and indicate where certain types go to in situations of either stress or security.

One set of connections between numbers involve the triangle in the center of the Enneagram that connects points 3, 6, and 9. The ascending numbers indicate where each number goes in security. In other words, in security, 3 goes to 6, 6 goes to 9, and 9 goes to 3.

This might be confusing at first, but once you get a sense of what the numbers mean, the connections begin to make more sense. For example, Type 3 is the Achiever, someone who is very focused on accomplishment and success (or at least the appearance of it). When a 3 is in a secure place, they begin to look more like a healthy 6, the Loyalist, a good friend who thinks not only of themselves but also the good of the group.

Similarly, Type 6, the Loyalist, often struggles with anxiety and making decisions. When a 6 is in a secure place, they begin to look more like a healthy 9, the Peacemaker, who is more laid-back and able to trust their gut feelings.

Finally, Type 9, the Peacemaker, often struggles to get going and do what needs to be done. When a 9 is in a secure place, they begin to look more like a healthy 3, the Achiever, who is more goal- and action-oriented.

The other numbers are connected in specific ways as well. In the direction of stress, the ordering goes as follows: 1-4-2-8-5-7. The easiest way to remember this ordering is if you double 14, you get 28. If you double 28, you (almost) get 57. In the direction of security, the ordering goes in the opposite direction: 7-5-8-2-4-1. I haven’t found a handy trick to remember this one, just use the other trick and work backwards.

Money and a Computer Game

When I first started to learn about the Enneagram, I was skeptical of the inter-type movement part of the theory. But it has been consistent with some of my experience, so who knows?

Here’s a quick example of intertype movement that happened to me recently. I’m a 6, the Loyalist. Again, if you aren’t familiar with the characteristics of the 6, they tend to struggle with anxiety and fear. Awhile back, I felt the urge to play a computer game I like. The weird thing about the urge, was that I literally hadn’t thought about playing the computer game in several months. I had been quite busy with work, and things had been stressful around the house with trying to get pregnant and renovating our house. No time for a silly computer game that didn’t have a clear purpose.

Another thing that happened on exactly the same day was I received my monthly paycheck as well as a paycheck for a consulting job I had done. I had been feeling stressed about money for a few months, due to spending a lot of money on IVF and house renovations. With the paychecks deposited, I felt a bit more secure in our finances. Hence, the move to 9, and the urge to play the computer game.

What do you think of the inter-type movement aspect of Enneagram theory? Have you seen this play out in your own life? Has it helped you interpret your behavior in a meaningful way? 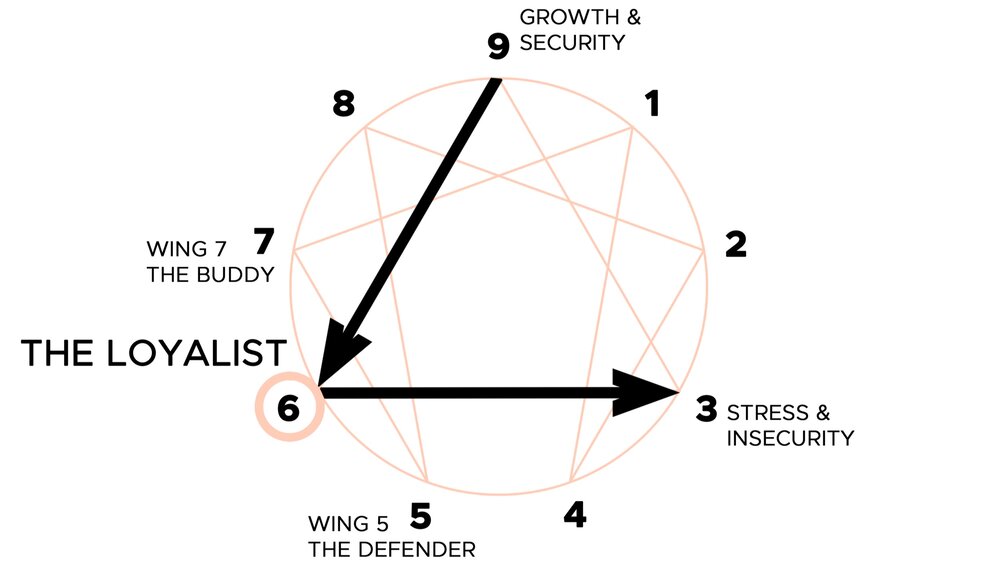