The 9 P’s of the Enneagram

Sometimes it is tough for people new to the Enneagram to remember what all the numbers mean. Someone might say they are a Type 4, and you scratch your head, trying to remember. The other day, I saw a list of descriptors of each number, all starting with the letter “P”

Ones tend to be perfectionistic. They can be detail oriented and have a tendency to notice what is wrong about a situation or person. They have a constant inner critic that provides a running monologue about everything they are doing wrong or could improve. They can be passionate about social justice and righting the wrongs in the world.

Twos tend to be pleasing. They are tuned into the needs of others, and are often willing to lend a hand. They are people-oriented and quite helpful. The tough thing about twos is that they can be focused on others to their own detriment—sometimes they aren’t as in tune with their own struggles or issues because they are so focused on helping others.

Threes tend to be performing. They are high achievers, and place a strong emphasis on being (or appearing) successful. Sometimes in their push to achieve, they can cut corners because the key is that they are perceived by others as successful. Their self-worth is tied to what they do—they have a tough time feeling okay about themselves unless they are winning.

Fours tend to be poetic. They place a high priority on being unique and their own person. They tend to beat to their own drum. Of all the numbers on the Enneagram, they are the most intense and feel their emotions very deeply. Fours have the potential to struggle with emotional problems such as depression.

Fives tend to be perceptive. They are often analytical and deep thinkers. They have a limited amount of energy, so they tend to stay on the outside and observe, rather than getting too personally involved with other people. Fives can have strict boundaries with others, and guard their time and energy.

Sixes tend to be perturbed. Of all the numbers on the Enneagram, they tend to struggle the most with anxiety and fear. They are “worst-case scenario” thinkers. On the other hand, they are very loyal to their friends and institutions they are involved with (e.g., civic or religious organizations). Because of their fear, they look to others for help with making decisions.

Sevens tend to be proactive. They are often extraverted and high-energy. They long to experience life to the full, and don’t want to miss out on anything. They often bounce around from thing to thing, and can have difficulty focusing their energy on one particular objective or task. In their pursuit of pleasure and new experiences, they can have a tendency to over-do it.

Nines tend to be peaceful. They value harmony in their relationships with others. Sometimes they have difficulty finding themselves or their own opinion—they have a tendency to merge with whoever they are talking to. Nines tend to have low energy—they can have trouble getting going and can struggle with procrastination.

What have you found to be the best way to remember the numbers on the Enneagram? 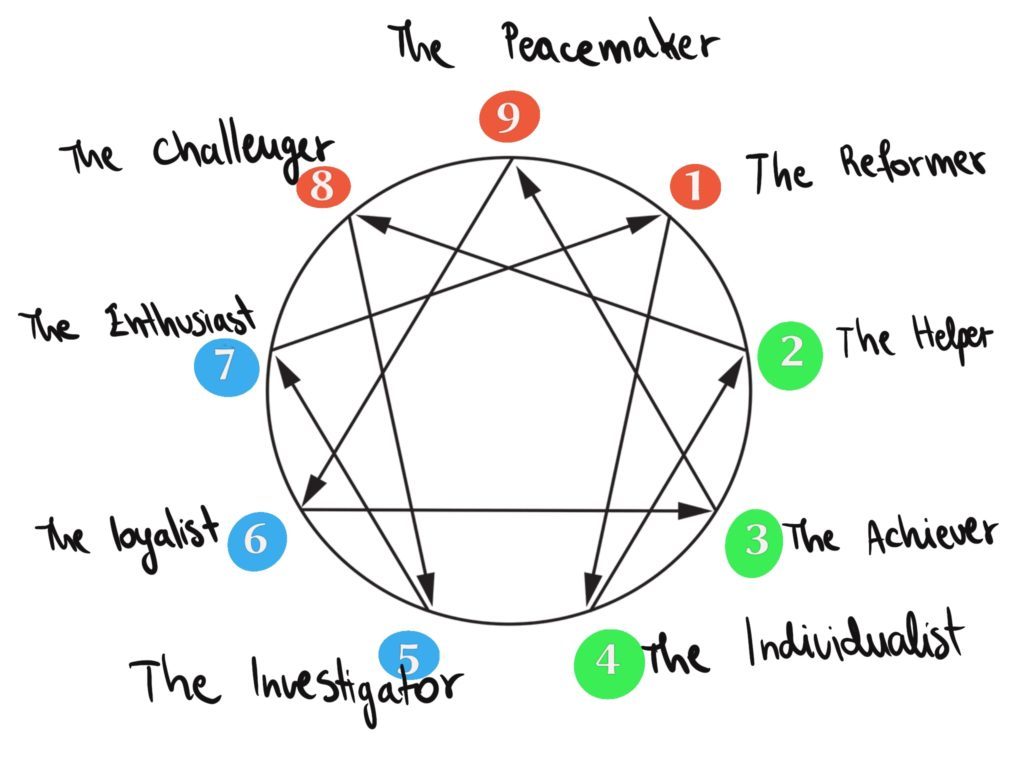