What is More Important: Behavior or Identity?

One of my favorite parables of Jesus is the story of the Good Samaritan. Jesus is approached by an expert in the law, who asks him what he must do to get eternal life. Jesus asks what is written in the law, and the expert answers that we need to love God and love our neighbor as ourselves, which is what Jesus taught.

Who is My Neighbor?

Then the expert in the law asks an interesting follow-up question: “And who is my neighbor?”

I love it that he asked that question. He wanted to know more details. What does it actually mean to love your neighbor? What kinds of people fall into the category of “neighbor?”

Jesus answers with one of his most famous parables:

A man was going down from Jerusalem to Jericho, when he was attacked by robbers. They stripped him of his clothes, beat him and went away, leaving him half dead. A priest happened to be going down the same road, and when he saw the man, he passed by on the other side. So too, a Levite, when he came to the place and saw him, passed by on the other side. But a Samaritan, as he traveled, came where the man was; and when he saw him, he took pity on him. He went to him and bandaged his wounds, pouring on oil and wine. Then he put the man on his own donkey, brought him to an inn and took care of him. The next day he took out two denarii and gave them to the innkeeper. “Look after him,” he said, “and when I return, I will reimburse you for any extra expense you may have.”

Then Jesus asked, “Which of these three do you think was a neighbor to the man who fell into the hands of robbers?” (Luke 10:30-36)

It’s interesting that Jesus uses a Samaritan as the hero in his story. Jews and Samaritans hated each other—The Jews saw themselves as pure descendants of Abraham, whereas the Samaritans were a mixed race produced when Jews had intermarried with other groups after Israel’s exile. Based on identity alone, Jesus’ audience would have expected the priest or the Levite to do the right thing. Yet they pass the wounded man and walk right on by him. The Samaritan, in contrast, actually loves the wounded man with his actions.

You might have a great heritage or background in the faith. You might have come from a long line of church-goers. Your pedigree might be excellent. But none of that matters to Jesus. What matters is love being expressed through your actions and behaviors. That is what counts. 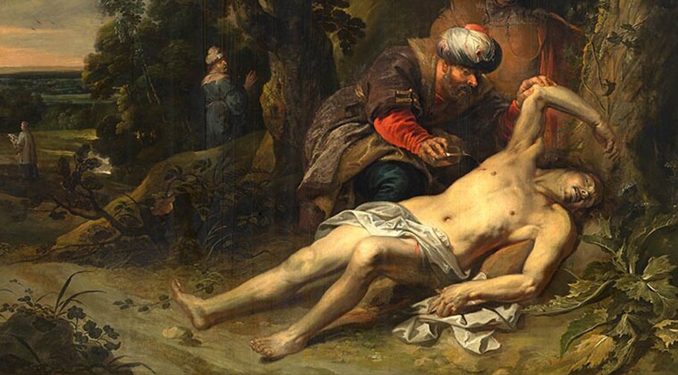