Take Care of Your Own Business First

Sometimes in life, we’re so focused on what other people are doing that we forget to take care of our own business. This happened to me the other day. One of my hobbies is fantasy football. Although I love it, I’m not the best at it. This season has been particularly rough—injuries, bad decisions, losing several games by just a handful of points—you get the idea.

Trying to Make the Playoffs

It was the last game of the regular season, and my season was hanging in the balance. In order to make the playoffs, I needed to win my game AND I needed the team ahead of me in the standings to lose. I was projected to win my game, so I felt good about my side of the equation. But there was a big problem! The opponent of the team ahead of me had quit checking her team. She had someone in her starting lineup that wasn’t even playing.

Immediately I went into problem solving mode. I sent her a text and explained my situation. I asked if she would update her lineup this week. (Luckily, she was willing.) I also started to look at her team and possible free agents. I gave her some advice on optimizing her lineup. She followed my advice and set her lineup. I settled down to watch the games on Sunday, satisfied I did everything I could to make the playoffs.

I started to watch the games, following the players of my friend and the team ahead of me in the standings. It was up and down for a while, but finally it looked like she was starting to pull away. Whew! It looked like this was actually going to happen!

Then I switched over and checked my own game. I was behind! What? How could that be? Wasn’t I projected to win? Sure enough, now I was losing. I started to get frustrated. All that work to help my friend with HER team, and now it looked like I wouldn’t even win my own game!

I ended up winning my game and making the playoffs, but it took a huge game from one of my players on Sunday night to do it. But the whole experience brought up an important lesson that we often forget: It’s important to take care of your own business first.

Focused on Other People’s Business

Take Care of Your Own Business

Whenever you find yourself spending a lot of time and energy focused on someone else, press the pause button. Why are you spending so much time in someone else’s business? This usually isn’t an effective way to live. How could you shift your focus back to yourself and your own life? Make sure you take care of your own business first. 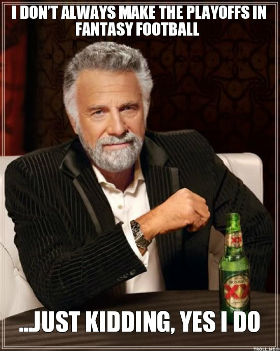