The Challenge of Taking Responsibility

It’s hard to take responsibility for our lives. In the very beginning of the Bible, there is a story that illustrates this deep truth.

Adam and Eve are placed in the Garden of Eden, and God tells them they can eat from any tree except one that is in the middle of the garden. After succumbing to temptation and some urging from a wily serpent, Adam and Eve eat the fruit from the forbidden tree. Here’s where the story gets interesting.

Then the man and his wife heard the sound of the Lord God as he was walking in the garden in the cool of the day, and they hid from the Lord God among the trees of the garden. But the Lord God called to the man, “Where are you?”

When Adam and Eve realized they did something wrong, their first reaction was to hide. I think we are the same way. There’s something inside us that wants to avoid punishment and getting found out, so our first reaction is to NOT take responsibility (or even deal with the issue at all). However, this strategy doesn’t usually work. It just delays the inevitable.

He [Adam] answered, “I heard you in the garden, and I was afraid because I was naked; so I hid.”

And he [God] said, “Who told you that you were naked? Have you eaten from the tree that I commanded you not to eat from?”

The concept of nakedness in this story is an interesting one. There is a literal aspect to the nakedness—the story says Adam and Eve sewed fig leaves together and made coverings for themselves. But there is a metaphorical aspect to the nakedness that is tied to shame. Nakedness has to do with exposure and vulnerability. When God first created Adam and Eve, the story says they were both naked and felt no shame.

The man said, “The woman you put here with me—she gave me some fruit from the tree, and I ate it.”

Then the Lord God said to the woman, “What is this you have done?”

This blaming strategy doesn’t work either. People (and God) can usually see right through it.

Do you struggle with taking responsibility for your life? How can we stop hiding and blaming others for our problems? 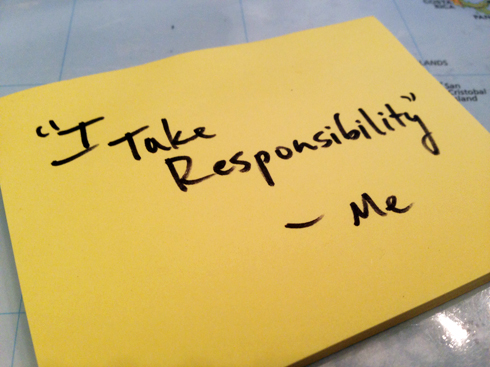