The Sin of Certainty

I’m reading an interesting book by Peter Enns called “The Sin of Certainty.” The basic idea is that as Christians, we often define faith as being certain that what we believe is true. I could connect with this. As a kid growing up in the church, what mattered most was belief. We were saved by believing in Jesus. We were taught that if we had enough faith (i.e., a strong enough belief), we could do anything.

Enns has a different take on it. He thinks faith is better defined as trust in God, rather than a certainty of belief. Indeed, in the Bible, we see people struggle with a lot of ups and downs. Their belief wavers at times. And God seems to be okay with this. It’s as if having some ups and downs in your belief is normal, kind of like part of the deal. The important thing is to trust God and maintain the relationship.

I like this emphasis, because I think the focus on “right” belief has led to some tough things for religion. For example, many Christians stick to their guns about issues like creation vs. evolution, even when the scientific community has reached a consensus. This makes Christians look like they don’t care about science. In the past, Christians have also resisted progress on issues such as racial reconciliation and equal rights for LGBT individuals, partly due to a strict adherence to particular beliefs and readings of Scripture.

The Ups and Downs of Faith

Also, defining faith as being certain that what you believe is true can cause problems for folks as they go through the normal ups and downs of life. The reality is that most people grow, change, shift, and develop over time. Sometimes you might feel more certain about what you believe, and sometimes you might feel less certain. This is a normal process. But when you define faith as certainty, you might think you are losing your faith when you feel less certain or change your mind about something. But it’s actually pretty normal.

Engaging with People Who Are Different

Finally, defining faith as being certain that what you believe is true makes it difficult to engage peacefully with those who believe differently. Placing such high importance on a certain set of beliefs puts beliefs as kind of a measuring stick for who is a “true Christian.” What happens, then, is people split community because of disagreement on all sorts of issues. Perhaps if we prioritized relational aspects of faith such as trust in God or loving one’s neighbor, we would be able to coexist more peacefully with one another.

How do you define faith? What do you think of Pete Enns’ definition of faith as trust in God? How big of an emphasis do you place on feeling certain that what you believe is true? Have you had any times in your life where the emphasis on certainty has been problematic for you? 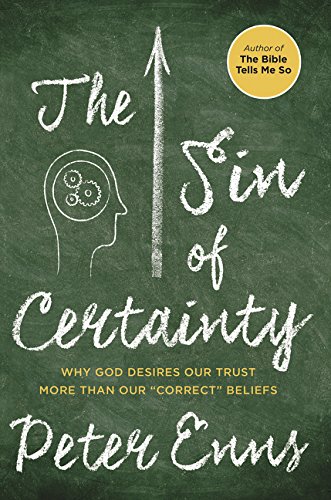