There are a lot of programs out there on how to change something in your life. Whether you want to lose weight, stop smoking, or improve your relationship with your spouse, there’s a book or program out there for you.

Here’s the thing that kind of sucks: Most of these programs don’t work. Sure, they work for some people. But for the majority of folks, the program doesn’t result in lasting change. Something about the program doesn’t work, and the person is back to square one.

Part of the reason why these programs fail is that they treat people using a one-size-fits-all approach. The programs don’t realize that what works for one person might not work for another person. The programs don’t take into account that people are in different places in how they are thinking about change. For example, Bob might be just thinking about quitting smoking, but he isn’t certain he really wants to do it yet. Jimmy, on the other hand, might know for sure that he wants to quit smoking, but doesn’t know what steps to take first. Bob and Jimmy need different change programs. A one-size-fits-all approach won’t work.

One important finding from psychology is that people go through different stages when trying to make a change in their lives. Depending on the stage of change a person is in, different interventions tend to be more effective. Here are 4 key stages of change, along with the kinds of interventions that are most likely to be successful at each stage:

When you are embarking on a change effort (or helping someone else change), remember the stages of change. One size doesn’t fit all. First, take some time to evaluate what stage of change you are in. Then consider which interventions work best at that stage. Put together a plan of attack that matches your stage of change. 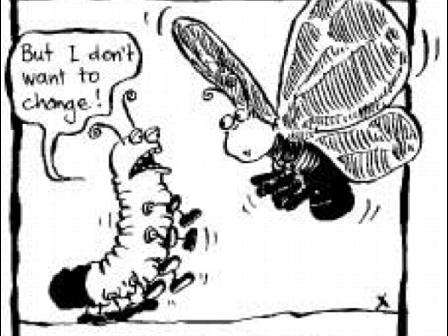